Prior to 1950, safety requirements and especially fire safety regulations did not play a big part of rolling stock manufacturing procedures. According to Metral (2014) Passenger coaches were built from materials such as Steel and Wood, seats used wool, leather or leatherette. These materials are considered as highly unsafe when in proximity to fire or heat, with no elements of safety behaviour characteristics.

The following years saw plastics become more and more commonly used as electrical covers throughout passenger coaches, aiming to increase aesthetics and comfort for passengers. The increase in the use of plastics and electrics made the fire safety element a bigger a risk. Dallmer (2014) highlighted that as the testing element was not a necessity it saw multiple incidents arise across Europe, where train carriages had caught fire due to the materials and components within the train not being fire safe.

Metral and Rose (2014) stated in 1991 as an overall safety development process, European countries met to discuss the possibility of producing a set standard for all train operators and manufacturers to follow. This being an extensive change to the industry saw numerous issues arise which complicated the implementation process such as:

The on-going negotiations and complications continued until 2013 when initial plans started to be put in place, eventually a proposal was developed and created; this is now now known as EN 45545. According to Metral (2014) the development process to motion this standard was one of the longest disputes the CEN have took part in lasting around 22 years.

It was concluded that the EN 45545-2 standard will now regulate and standardise the fire protection requirements on a European level, all materials and components must follow a test procedure before being fitted. This is focused on flammability, flame dispersion and in particular, the development of smoke gas and its density and toxicity. EN 45545 standard is a significant development in the rolling stock industry, now manufacturers and operators will have to adapt accordingly to be sure that passenger safety is guaranteed. 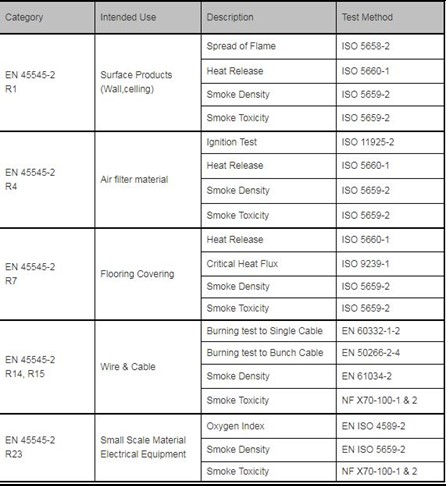 Derby (UK) based Tidyco has supplied hydraulic braking systems to the rolling stock OEM and overhaul rail industry for over 40 years.